Solfeggio frequencies are ancient energy tones in which have been used in much-sacred music for use in rituals and chants back then. Now it’s often used for meditation, ritual, yoga, or simply something to relax and listen to! Mind you, the chants in connection with their tones are believed to unfold blessings and happiness when sung in harmony among yourself or a group. Each solfeggio frequency has a function to help relieve turbulence within and create an inner balance of peace/serenity. It awakens our inner intuition, and believe it or not, repair our DNA. The idea is that specific notes found in ancient music have particular uses. Pitches, or notes, are described in Hertz, which is their frequency in cycles per second.

The Main 6 Tones & Their Functions:

How Were They Discovered?

Dr. Joseph Puleo wrote a book in which he states being introduced the Pythagorean method of numeral reduction. While he had used this method, he stumbled across six repetitive codes in the book of numbers.

The Pythagorean method is a simple reduction method used to turn big numbers into single digits. The values of all digits in the number are added up. When after the first addition, the number still contains more than one digit, the process is repeated. Here’s an example:456 can be reduced to 4+5+6 = 15, and subsequently reduced to 1+5=6. So the number 456 reduces eventually to the single digit 6.

Using the Pythagorean method, we find the base or vibrational numbers are 3, 6, and 9. Nicola Tesla tells us, “If you only knew the magnificence of the 3, 6, and 9, then you would have a key to the universe.”

As Author Rees (author of “Just Six Number”) puts it, “These six numbers constitute a recipe for the universe.” He adds that if any one of the numbers were different, “even to the tiniest degree, there would be no stars, no complex elements, no life.” (From Discovery Magazine).

The history of the solfeggio tones begins with King David, who then passed the secrets on to Solomon. Sometime after Solomon, the tones were lost. David was given six tones, which he created with strings on his lyre. These tones are all used with the psalms, also designed by David. The mathematics of the tones matches the mathematics of the psalms (gematria). Solomon used the tones and the gematria in the creation of the Song of Songs, also a psalm. This was considered the most sacred of the psalms.

Albert Einstein stated: “Concerning matter, we have been all wrong. What we have called matter is energy, whose vibration has been so lowered as to be perceptible to the senses. There is no matter.” All matter beings vibrate at specific rates, and everything has its own melody. The musical nature of nuclear matter from atoms to galaxies is now finally being recognized by science.

The tuning practice adopted for western cultures from about the 16th century and used today is known as “Twelve-Tone Equal Temperament.” According to Joachim Ernst-Berendt, the 12-Tone Equal Temperament mistunes all consonant intervals except the octave. Our modern scale can create situations such as ‘boxed-in’ thinking, stuffed and suppressed emotions, fear-based or lack consciousness, all of which then tend to manifest into physical symptoms called ‘dis-ease’ or disease.

▽ Join a Workshop or Event 5 Best Cities for Your Reset Trip What is Witch Craft? Meditation: Why Do It?

EXPAND YOUR MANIFESTING AND UNSTUCK YOURSELF IN RECORD TIME! 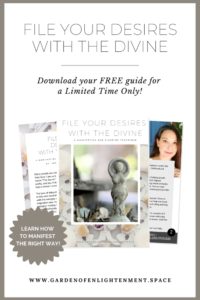 Stop manifesting the wrong way and learn how to do it the RIGHT WAY! Are you ready to become the master manifestor you are?

Thanks for subscribing! Please check your email for further instructions.